Mrs. Alice Anna (Kirkorian) Boyajian of 379 Hillside Avenue, Hartford, was born May 14, 1914* in Hartford, daughter of Armenian-born parents Anna C. (Hintlian) and Charles Kirkorian.  Alice was injured at the circus fire on July 6 and taken to Municipal Hospital where she died later that evening.  Two of Alice's sons, Fred and Stephen, were also victims of the fire, and all three were buried at Fairview Cemetery, West Hartford, after services at the Talarski Funeral Home.

Mrs. Boyajian is survived by her husband Frederick K. Boyajian; her infant son Norman; her brother Kirk C. Kirkorian with the US Army; and two sisters, Miss Sally Kirkorian of Hartford and Mrs. Pilune BozBeckian of Springfield, Massachusetts.  Alice was a 1932 graduate of Bulkeley High School, and her estate was awarded $9,500 by the arbitration board. 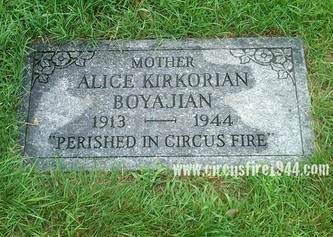 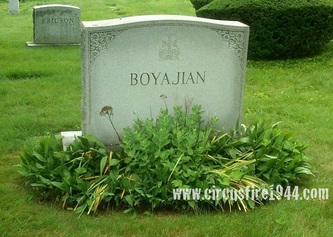