Joseph Charles Budrick, Jr. of 551 Hills Street, Hartford, was born April 8, 1937 in Manchester, son of East Hartford native Edith May (Wickham) and Lituanian-born Joseph Charles Budrick.  He was found dead at the circus grounds after the fire on July 6 and was buried at East Cemetery in Manchester.  He leaves his father Joseph.  His mother Mrs. Edith Budrick, 38, and his sister Miss Edith, 9, were also victims of the circus fire, as well as his aunt Viola Locke, 40, and cousin Elaine Locke, 6.  Services were held for all of them at the Watkins Funeral Home in Manchester.

The body of Joseph Budrick Jr. was identified at the State Armory on July 7 by Dr. Anderson, dentist.  Joseph's estate was awarded $7,000 by the arbitration board. 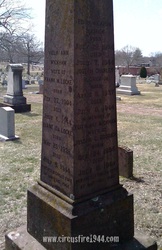