Mrs. Grace Dorothy (Smith) Fifield of Newport, Vermont, was born June 17, 1897 in Quebec, Canada, daughter of Emma Charlotte (Parsonage) and Luther Rominor Smith, Jr.  Although her body was never identified, she was assumed to have died at the circus grounds after the fire in Hartford on July 6.  Grace leaves her second husband of 11 years, William Elisha Fifield, 64; her son, Ivan Bashaw, 16; her daughters, Beverly Bashaw, 20, and Ivan's twin sister, Barbara Bashaw, 16; her mother, Emma Smith of Vermont; her brothers Luther Smith, 49, and Edward Smith, 35; and her sisters Mrs. Hazel Harvey, 54, and Mrs. Ada Clarke, 44.

Grace was visiting relatives in Wethersfield with her son Ivan, who last saw his mother ahead of him as they exited the burning tent.  She was 5'-4" in height, 145 pounds, and had dark blonde hair, and was believed to be wearing a brown and white flowered dress, grey or white shoes, no hat or jewelry, and a black handbag with about $40 in cash.  After viewing the bodies at the State Armory morgue, Grace's husband William thought that his wife may have had amnesia and taken a train to Canada, but it was ultimately declared that Mrs. Fifield was surely one of the dead.  Grace's estate was awarded $9,000 by the arbitration board. 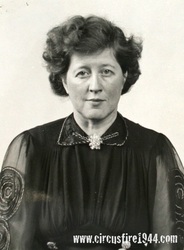