James Walter Fitzgerald, II, of 381 Hillside Avenue, Hartford, was born October 7, 1940 in Hartford, son of Massachusetts-born parents Marion A. (Stenberg) and James W. Fitzgerald.  He was found critically injured at the circus grounds after the fire on July 6 and brought to Municipal Hospital where he received supportive treatment for five days, including plasma transfusion, until he passed away early morning, July 11.  James was buried at Center Cemetery, Newington, after services at Taylor & Modeen Funeral Home on July 13.

James attended the circus with his mother, his brother David, and their next-door neighbors (possibly the Boyajian family).  They took a crowded bus to the circus grounds and sat high up in the bleachers.  James and his mother were both severely burned in the fire, while his brother was burned on his arms.  James leaves his parents; his brother, David A. Fitzgerald, age 6; and his maternal grandparents, Mr. and Mrs. Alfred G. Stenberg of Hartford.  James' mother and brother were also injured in the circus fire, not fatally.  His estate was awarded $6,750 by the arbitration board. 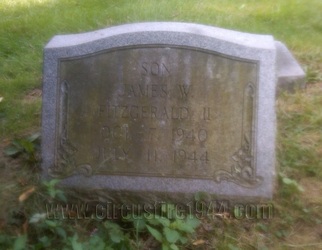 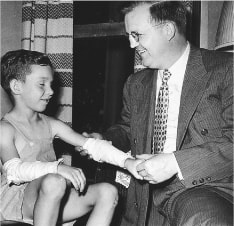