Helen Marie (Magnuson) Johnson of 21 Boulanger Avenue, West Hartford, was born April 29, 1889 in Niantic, daughter of Swedish born parents Anna (Hedien) and J. Frederick Magnuson.  She was found dead with her grand-daughter Constance Pellens, 2, at the circus grounds after the fire on July 6 and was buried at Cedar Hill Cemetery in Hartford after services at the Taylor and Modeen Funeral Home.  Helen leaves her husband Albin Johnson, 57; her daughters Miss Louise Johnson, 24, of West Hartford and Mrs. Grace Pellens, 27, of Hartford, whose daughter Constance died in the fire; her brothers Gustav Magnuson, 60, of Enfield and Samuel Magnuson, 52, of Brewster, NY; and her sisters Mrs. Olga Facius, 46, of New York and Mrs. Nannie Kosicki, 57, of Cromwell.

The body of Helen Johnson was identified at the State Armory on July 7 by her son-in-law.  Her estate was awarded $7,500 by the arbitration board. 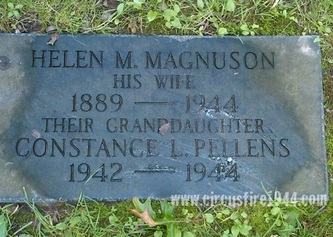 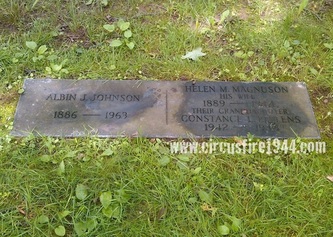