Bernard Herbert Koob, Jr., of 544 Park Road, West Hartford, was born May 2, 1937 in Hartford, son of Phildelphia natives Helen Marie (Herman) and B. Herbert Koob, Sr.  He was found dead, with his mother, Helen Koob, at the circus grounds after the fire on July 6, and they were buried at Fairview Cemetery, West Hartford, after services at the Newkirk & Whitney Funeral Home on July 9.  B. Herbert, Jr. leaves his father and his sister, Miss Gloria Koob, 17.

Herbert attended the circus with his mother, Helen, and the sister of Miss Gloria Koob's fiancé, Marcia Ann Rackliffe.  Marcia escaped the burning big top by jumping from the top of the seats, and running outside to safety where she searched in vain for the Koobs.

Body #2101 was identified at the State Armory as B. Herbert Koob, Jr., by his father on Friday, July 7.  His estate was awarded $7,000 by the arbitration board. 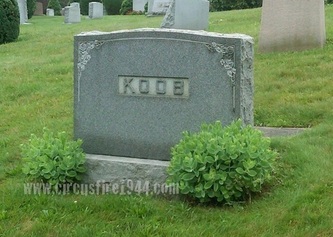 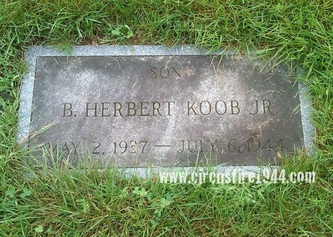