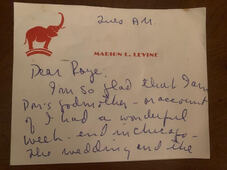 Marion's stationary, with image of an elephant.
Reflecting on more finds from that desk in Maine, I want to share a story of tragedy but one that also includes resilience and hope. This is a tale of how being, or not being at a certain place in time tragically transformed, but also saved lives.

Within that desk’s secret compartment I discovered two letters, one from a Hartford Attorney’s office and the other, a small note from my great aunt Marion written to my grandparents. Before focusing on my great aunt, I want to set the scene to one catastrophic day in Hartford on July 6, 1944.

Those of you who are too young (most of us now) or not from Connecticut perhaps are not aware of one of the most tragic fires in the history of the United States - the infamous Hartford Circus Fire. That sweltering hot day began as one of excitement for those 6000 to 8000 people who had tickets to the Ringling Brothers, Barnum & Bailey Circus. My grandparents Sam and Rachel Davidson along with my mom Georgianne were among those ticket holders. With my uncles away in the service, the plans were to meet my grandmother’s sisters Marion and Minnie who lived in Hartford, at the circus. I’m not sure of the details, but either my grandparents or my mom took ill that day, and decided not to go to the circus, a profoundly fortuitous decision.

My great aunts Marion and Minnie ( her nickname was Minnie Ha Ha, but my recollection of her was anything but fun. She didn’t like boys but that’s a story for another day).  So off the two went for an afternoon of what was supposed to be fun. I won’t get into all the details of the circus fire but I invite those of you who don’t know about it, to read the history.

The circus began as every other, the band played, the tigers and elephants performed and the audience was enthralled. Suddenly the band performed The Stars and Stripes Forever. This was a secret code to circus personnel that something was seriously wrong. A fire was discovered on the side of the tent and quickly shorted out the loud speaker system. Ring Master Fred Bradna tried to keep the crowd calm but panic ensued. The canvas tents were coated with paraffin and diluted in gasoline to waterproof them. This of course fueled the fire.

The aftermath caused 167 deaths and over 700 injuries, my two great aunts among the injured. My aunt Marion was reported to have been trampled by an elephant during the chaos but survived with chronic health and emotional issues.

Now back to the desk in Maine. One letter I discovered was written from a legal firm to my grandfather. The attorney has just visited my Aunt Marion in the hospital. In the letter, the lawyer relayed how relieved and happy Marion was that my grandfather agreed that he would financially support his sister in law for her entire life, being unable to work.  Doing research on line, it seems that my aunt was among the most severely injured and received one of the higher insurance payouts by the Arbitration Board for $15,000, a small amount today but was significant then. My grandfather was very philanthropic and I’m sure was more than happy to support Marion.

The 2nd letter is a note written to my grandparents by Marion after attending my uncle Donald’s wedding, thanking them for their kindness and how proud she was of her Godson Donald. My uncle Donald is almost 100, still drives and still plays a full round of golf, but that’s another story. The letter isn’t remarkable except for the stationary - my aunt’s trademark of a red elephant with its trunk up turned. An elephant, after being trampled by one?  My aunt’s ability to face her fears head on and embrace a love for elephants made her truly a survivor and not a victim.

I have only one memory of meeting my aunt Marion.  She never married, no children, lived in West Hartford and was close to my cousin Jeff. On a hot July day so many years after the fire, we rode our bikes to Marion’s apartment to take a swim in the pool. I remember her small apartment that was filled with her collection of elephants. All sizes, shapes and materials. She was kind to me even though I didn’t even know her.

So why was it that my mom had no relationship with Marion at all? I never remember her ever coming to our home, or my ever making a repeat visit. I do remember my mom saying that Marion had emotional problems and that she could get mean?  Was mom just protecting me? My other cousins had a relationship with her and loved her. Sadly she died in her 60’s. Something happened to create that emotional cut off. The people who know are no longer here to ask.  I had not thought about my great aunt in many years until finding these letters.

I just want to conclude by saying how I’ve fallen in love with my Aunt Marion. I’m so proud that she overcame this tragedy and found joy in her elephant collections. I so want to hug her and tell her that I love her and that I miss not being part of her life. What I do have is her letter and my one memory of visiting my aunt. I also have her story and now so do you. The will to live and face trauma head on is a powerful lesson.