Miss Mary F. Bergin of 75 Lincoln Street, Hartford, was born August 3, 1897 in Middletown, daughter of Irish-born Mary E. (Collins) and English-born John Bergin.  She was found dead at the circus grounds after the fire on July 6, and was buried at Mt. St. Benedict Cemetery in Bloomfield after services at the Ahern Funeral Home.  Miss Bergin's mother Mrs. Mary E. Bergin was also a victim of the circus fire.  Mary F. leaves her father, John Bergin, who would join his wife and daughter in eternal rest just two months later on September 7, 1944.

The body of Mary F. Bergin was identified on Friday, July 7.  Her estate was awarded $7,500 by the arbitration board.  Prior to her death, Mary worked as a secretary at The Royal Typewriter Company in Hartford. 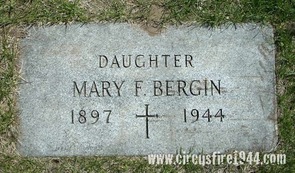