...trying to get over an animal chute my foot got caught....

My grandmother, Clara Russett, was planning again that year on taking me to the circus. But because she wasn’t feeling well my dad, John Philip Earley, brought me instead - which I feel turned out to be a huge blessing. I remember we were sitting in the tent on bleachers after we had seen the first part of the planned program, when I saw fire at the furthest end of the tent.  It seemed like everyone saw it at the same time and began to evacuate, but the flames already covered a big section of the tent when I saw it.  (It apparently was close to the top and wide before the people at our end were aware of it.) At least that is my recollection. It was very scary. Dad and I were not sitting very far from an exit but two incidents occurred as we tried to leave that slowed down our departure. The first as we were going down the bleachers I lost my glasses. They fell off my face because of the pushing crowd.  Dad was able to retrieve them for me. But then trying to get over an animal chute my foot got caught.  Dad had to release my foot from the chute.

Once outside we moved a distance from the entrance and stood there as people exited.  I remember distinctly a woman who had sat by us coming up and asking if we had seen her daughter who was sitting with her.  They had become separated when leaving and she was frantically searching for her.  Very sad.  Shortly after that I believe (but am not as certain of this recollection) a young man leaving the tent with a portion of his shirt in the back in flames.  I believe it was at that time that Dad said we had to leave and get home.  So I’m sure we avoided seeing the worst …..thankfully!

On the way home we may have stopped at a phone booth for Dad to call my mother – who was at home with my twin sisters, age 3 (and possibly my grandmother).  The phone booth memory is vague and I’m not positive of it.  But when we arrived back on Main St.  the family did not appear too frantic - as I recall??  So they may have known we were okay.  Some of our close neighbors were not as fortunate. From a diagram I saw of the tent I believe we were close to -not the main entrance- but the opposite one.

...looked up toward the northwest and shouted that she saw fire....

I was three years, two months old when I attended the circus that day along with my mom and a number of other neighbors. We almost didn’t go because it was so muggy and hot and very uncomfortable, especially if we were inside the tent but finally we all agreed to go and we took the bus to Barbour street.  I remember the bus because when we escaped the fire we returned home on the bus and I can remember waiting for it on the west side of the circus grounds. When we went to our seats on the southeast side of the tent, pretty close to an exit,  I sat down on the ground at the first row of bleachers because my mom didn’t want to go up higher with our friends because she was afraid of walking on the open bleachers.  Early in the performance my mom left me with our neighbors while she took someone to the bathroom.  Upon returning to the area where we were sitting she looked up toward the northwest and shouted that she saw fire.   I really don’t remember running out of the tent or any of the horror that erupted after we got out of the area where we were seated but we ended up on Barbour street and took the bus home. My mom didn’t talk very much about the fire and I don’t have many facts about the tragedy except the ones I’ve recounted.

...her dad was in shock and tears trying to find our bodies...

I am a survivor of the Hartford Circus Fire, along with my parents Paul Arthur St. Onge and Emma Couture St. Onge.  I was 1 1/2 years old and my parents had taken me to the circus on July 6, 1944.  I don't remember that day but my parents have told me their account of the events.  My mother said she saw the fire start on the hay on the floor on the opposite side of the tent. The fire then went up the tent wall and up to the roof very fast.  People were panicking and trying to get out of the same entrance from which they entered.  We were sitting on the upper tiers of the bleachers and my parents decided to drop down between the seats to the ground and get out back under the tent.  Mom handed me to dad on the ground and she dropped down on her own and scraped her arms on the way down. She was 21 at the time.  We went out under the tent and made our way to the car in the parking lot where they watched the fire progress.  They remained in the car for hours since no traffic flow was allowed due to police, fire, and medical traffic and panic traffic jams.

Phones were scarce, unavailable, or tied up, so family at home did not know our status. On the radio they heard about the fire and the devastatingly tragic death toll.  Since my mother's family knew we went to the circus, my grandfather, Donat Couture, called authorities to check our status. But the authorities didn't know since we were waiting in the car. So my grandfather later was summoned to search for and identify our bodies. Mom said later that her dad was in shock and tears trying to find our bodies but couldn't; and assumed we were burned beyond recognition.  We lived in Granby, Connecticut, so we must have passed on the road as he was going to Hartford and we were coming home. It was euphoric with rejoice and thanks when he came back and found us alive.  My mother is still alive in a nursing home in Winter Garden FL and is now 97 yrs old.

...crawled between the legs of those in front of me...

I attended the circus with a neighbor and her 4 year old daughter, Charlotte; I was 5 years old. We were on the opposite side of the fire which I recall seeing begin in the far right corner of the tent. There were sounds of people telling us to go to the exits, causing a panic with many people falling and stepping over each other. Unfortunately, Charlotte's mother fell and she remained with her. For whatever reason I crawled between the legs of those in front of me and managed not to be stepped on.
What is truly a miracle, once outside and being alone, there were a few young women who were helping people and because I was so young they began asking me my name, where I lived, etc. Then one of them took me to a house close by where a family had opened their doors to those who needed help. Many people were burned and lying outside on the ground and I was being sheltered from seeing that. Once taken inside, someone found my home phone number and called my parents who arrived quickly and took me home. Charlotte's mother was seriously injured with a back injury which remained for the rest of her life. I believe they both were taken to a hospital since I didn't see them after we were separated.  It's amazing that so many details came back while writing this - especially since I was only 5. Apparently, I was not hysterical and was able to communicate with those who were paying attention to me.
It may be interesting for you to know that Charlotte's father, Philip Acquaviva, was The Hartford Courant's principle photographer at the time. My father, Hal Kolb, was staff pianist/organist with WTIC. It happened that our two families lived across the street from each on Beacon Street.

My mother Hazel Doyle brought me, Susan, to the circus on July 6, 1944, along with my younger sister Clara and my father’s sister Jeannie Streight. I was two-and-a-half years old but I have two vivid memories of that day. Mother was pregnant with my brother who was born in early September. She told us later that  she was nervous about fires and did not like the reserved seats we were sitting in. So she moved us to bleacher seats that would be easier to get out from. She said she saw a glow on the side of the tent when the lions were performing and took us out of the nearest exit. We were probably among the first tot leave. I remember mother saying look out for broken glass on the ground and looking around but only seeing some people. I also remember walking down a street  holding mother’s hand and seeing someone on the other side of her who I later learned was my aunt Jeannie holding Clara. We had the circus program in our house when I was growing up, and now I wished I had asked more about it.  I am so grateful that my mother was so observant and got us out quickly.

Catherine Rogers, in 1944
During the war years, my father worked at Pratt & Whitney and my mother worked for Pioneer Parachute.  On July 6, 1944, my father was on vacation and was trying to finish shingling his garage.  It was too hot and the shingles were too sticky, so my father came off the roof and told us to change our clothes because he had a surprise for us.  My cousin and I quickly put on our taffeta dresses and party shoes and off we went in the car.  The surprise was going to the Ringling Bros. Circus.  I had never been to a circus under a tent like this.  We had seats high up on the bleachers which were like planks and it was very, very hot.  My mother tried tying our hair back with some string she had in her pocketbook and she began to worry that my cousin, Doris, was going to faint and fall through the bleachers.  She nagged at my father who went back and bough seats for us in the reserved section.  We moved to the new section where we could sit in chairs and the circus acts just started when there was a big ball of fire in the roof on the opposite side of the tent.  My father thought it was part of the circus act but quickly realized that it was a real fire.  People began screaming all around us and knocking chairs over as they tried to get out.  My father helped one woman up who had fallen and grabbed my cousin and I very tightly by the wrists.  We climbed over the animal cage and headed for the way out.  When we got right to the opening, a circus attendant was standing there saying to go out the side but my mother just yelled "Don't listen to him, keep going!" and we did.  We ran past the man and got outside and heard terrible screams and turned and saw the tent collapse on all those still trapped inside.  It was a sad day in Hartford with 168 people dying in the fire. 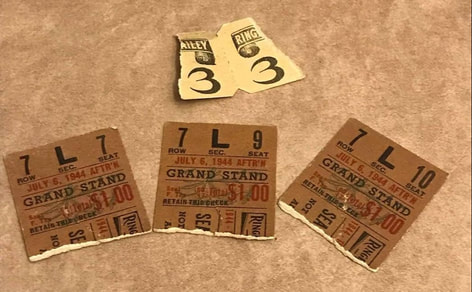 Ticket stubs for the circus, saved by Catherine Rogers
More stories can be found in the ESSAYS section.