circus facts - the 1944 season
Officers of the Ringling Brothers Barnum & Bailey Combined Shows, Incorporated, at the time of the Hartford circus fire:
Five circus officials were arrested at the circus grounds on Friday, July 7, 1944.
The 1944 season began for the "second section" (outdoor venues under the big top) on June 5, 1944 in Philadelphia.  The same big top that was used to start the season was used in Hartford and each stop in between.
700 employees with the show, not including performers.  Includes truck drivers, canvas men, seat men, rigging men, ring stock, elephant men, side show personnel, ticket takers, and ushers. [James Haley testimony]
Circus records indicate three fires in the 1944 prior to the Hartford fire, none of which were on the canvas sidewalls and none threatened the tent.

The canvas sidewall is frequently charred by cigars or cigarettes during the season, but these never results in flame.  Unless a flame is applied directly to the canvas a fire cannot be started. [RBBB motion for suspension of sentences, 3/23/1945]

The canvas roof of the big top was given a paraffin treatment for waterproofing in May, 1944, before the season began. Paraffin wax was boiled and thinned with gasoline, then poured from watering cans and brushed into the canvas. RBBB boss canvasman Leonard Aylesworth was in charge of the process.
The canvas sidewalls were not given this treatment.
The big top had never been fireproofed. [RBBB general manager George W. Smith]

The circus was held on the circus grounds until the morning of Saturday, July 15, 1944 when they circus train left for Sarasota, Florida. Only equipment that was immediately involved with the fire investigation was left behind, as well as approximately 33 employees who are still to be questioned by the state's attorney.THC
The Ringling Brothers and Barnum & Bailey Circus will leave its winter headquarters in Sarasota, Florida on Monday, July 31, 1944, for Akron, Ohio, where it will open at the Rubber Bowl on August 4, 1944. Future scheduled shows include University of Detroit Stadium, August 8 through 20, and Soldiers Field in Chicago, August 22 through September 4. The entire performance will be staged facing one direction because of increased room in stadiums and ball parks, all patrons will sit on one side. The circus train has been reduced from 79 cars to 67 because the tent and poles will no longer be needed.THC
hospital facts & figures
Patients at Hospitals as of Monday night, 7/10/44:
110 total
32 at St. Francis, one critical
21 at Municipal, all critical
57 at Hartford Hospital, 6 critical
Patients at Hospitals as of Tuesday, 7/11/44:
113 total
32 at St. Francis, none critical
20 at Municipal Hospital, 19 critical
60 at Hartford Hospital, 6 critical
1 at East Hartford Hospital, not critical
city department information
Issuance of the Performance License:

Several months before the fire, William H. Cronin, Department Clerk for the City of Hartford, was visited by a Mr. Conway, representing the circus, to schedule dates for the circus. Conway inquired about July 5th & 6th, Cronin checked the record and told the him that those dates were alright.  Conway signed a printed agreement form which he left with the city clerk to give to the circus business manager when he called for the license when the circus arrives in town.
At 11:30am on July 5, 1944, Cronin spoke with Hartford Police Chief Hallissey about the circus.  Hallissey said that Mr. Brice, police chief for the circus, had called him to make arrangements for police protection on the circus lot.
At 12:30pm on July 5th, Cronin spoke with Miss Coughlin at the Mayor's Office, and she informed him that a representative from the circus had been at City Hall.
At 1:15pm on July 5th, the circus' business manager Mr. Herbert Duval visited Hartford Police Headquarters, and Cronin issued the license to him in Chief Hallissey's name.  $300 was paid, representing the license fee for two days at $150 a day, and Cronin gave Duval a copy of the license, a receipt and the form previously left by Conway.  Cronin recalls Duval handling this business for the past 3 or 4 years, and this manner of issuance of the license was the same as it had been in previous years since the function was turned over to the Chief of Police.  Duval remarked to Cronin on July 5th that there would be no matinee show as the circus was late in arriving, and that he had a taxicab waiting for him as he left. 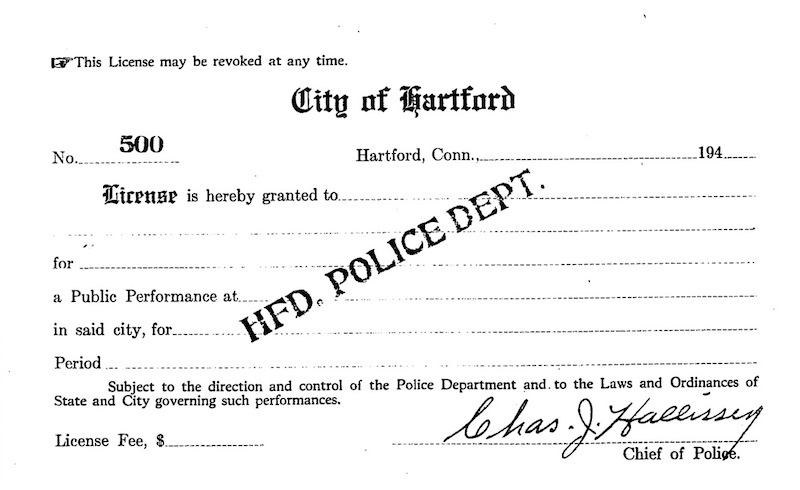 identification of the victims
State Police Commissioner Edward J. Hickey was on-scene during the fire, and took command.  He directed the assembly of a temporary casualty station at the fire site where the dead were taken, while the injured were rushed to hospitals. Observing the number of dead, Hickey made arrangements for the State Armory on Broad Street to be used as a morgue. State Medical Examiner Dr. Walter Weissenborn and County Coroner Frank E. Healy authorized the removal of the deceased to the armory.
Inside the main entrance of the State Armory were 4 parallel rows of long tables:
A First Aid station was opened on the ground floor of the armory to serve those waiting outside and in the lobby. [George M. Smith, MD]
As the bodies arrived at the State Armory, Connecticut State Police Trooper William N. Menser, the assistant identification officer, attached State Police casualty tags to each one, bearing a four-digit number. The bodies were placed on cots, covered with blankets, and thoroughly examined by Dr. Weissenborn, Officer Menser, and Hartford dentist Dr. Edgar B. Butler. Notes were kept in a loose-leaf notebook for each body, indicating the approximate age of the victim, height, weight, sex, build, hair color, scars, dental work, and any clothing or jewelry found with the body.
Long lines of people waiting to view the dead had formed, and they were allowed to begin entering the armory at 5:00pm. Girls were stationed on the main floor of the armory recording all information that was being phoned in and registering those who came looking for a relative or a close friend. Upon registration, visitors would be taken in groups of 12 to view the bodies, each accompanied by a state trooper and a nurse.  Bodies were sorted into groups by age and sex, and searchers would be taken to the section where they were mostly likely to find who they were looking for.  Officer Menser observed that many people were reluctant to make positive identification due to the horrible conditions of the bodies, and many returned numerous times before professing satisfaction.
The skin on the hands of the victims was badly burned and no identifications were made by fingerprints.  Any paper items on the bodies was burned, making identification by that method impossible. Rings, bracelets, and watches were helpful in making identifications, especially those with inscriptions.
All identifications were later cleared by the medical examiner, who signed the death certificates.
facts & figures - firefighting
There were no fire alarms boxes or hydrants on the Barbour Street circus grounds lot. The nearest fire alarm box was approximately 600-feet from the lot entrance, at the corner of Barbour Street and Cleveland Avenue. There were two fire hydrants on Barbour Street, one directly in front of the circus grounds, about 300-feet from the Big Top, and one on the opposite side of the street approximately 175-feet south of the bus stop pole located directly opposite the circus lot entrance. --Hickey report
From the local fire marshal's office records, a list of brush and grass fires at the Barbour Street circus lot that required fire department response:
Local fire marshal Henry G. Thomas made no inspection of the circus grounds before the fire. There were no reports of any existing fire or casualty hazard at the circus grounds made by the local fire marshal to state fire marshal Edward J. Hickey. --Hickey report
Fire Apparatus Responding To Alarms
1st Alarm - Box 82 - Clark & Westland St. - 2:44 p.m.
#7     900' - 1" nozzle - hydrant front of lot on Barbour Street
3 hours, 17 min. Capt. McDonald - pumper worked.
#2    800' - 1 1/4" nozzle - hydrant front of lot on Barbour Street
2 hours, 5 min. Capt. Kirby - pump used.
#16  1000' - 1 1/4" nozzle - hydrant at 337 Barbour Street
2 hours, 46 min. Capt. Yacavone - pump used.
Truck #3   Lt. Curtin, assisted on lines and rescue work.
Truck #4   Lt. Connors, assisted on lines and rescue work.

Police Court Prosecutor James F. Kennedy declared Friday, July 7, that his investigation had established the fact that three to four parts gasoline and one part paraffin had been used as waterproofing for the canvas tent, and that the preparation was applied to the main tent last April. Mayor Mortensen issued a similar statement about the waterproofing and announced that he determined that a waist-high steel runway for animals had closed off and obstructed exits. Approximately 60 bodies were found jammed against the runway.THC

"The circus could not get fireproof tents because the material was a war priority unless the Ringling circus agreed to play in military bases. John Ringling North I agreed, but the cousins protested. He gave in and stopped using fireproof material." -- as told by son, John Ringling North II in a ToledoBlade.com article, 8/7/2011.

The State Armory emergency center for identification of victims of the circus fire received some 10,000 calls during the first 24 hours after the disaster. -- War Administrator Henry B. Mosle, The Hartford Courant, 7/16/1944.

Partial list of lost articles picked up in the vicinity of the circus fire, held in the property room of the Hartford Police headquarters by orderof State's Attorney Hugh Alcorn, Jr.:THC
about 100 women's compacts of various sizes and shapes, many black with soot
a half-filled cigarette case, charred black
about 20 crucifixes, some tarnished, some bent out of shape
20 lipsticks
a pen knife
a half burned purse
a comb untouched by fire
a rabbit's foot attached to a key chain, and many other tokens of luck attached to key rings and chains
many eye-glasses and cases, some crushed, some burned
a torn pocket from a girl's coat with a Girl Scout pin
a partly burned umbrella with badly twisted framework
approximately 20 pairs of shoes, one a size 2, most in bad shape

The previous day's performance, which would have been the first in Hartford that year, had been cancelled because the circus tent was six hours late coming in from Providence, RI.

Merle Evans, the bandleader, saw the fire and signalled the band to play Stars and Stripes Forever, which was code to the circus employees that there was an emergency.

Flags on the State Capitol flew at half-staff on 7-7-1944 in a sorrowful fluttering tribute to the circus dead on order of Gov. Raymond E. Baldwin. (Manchester Evening Herald, 7/7/44)

John M. Carson, chief usher for the circus, estimated there were 6,000 people in the tent, approximately half of its capacity, when the blaze started. (The Hartford Courant, 7/7/44)

All bodies were removed from the grounds in approximately one and one-half hours.THC

The circus had been scheduled to visit Rochester, NY on July 19 and 20 at the Norman Street grounds, but would instead return to winter quarters at Sarasota, FL for repairs.

As word of the calamity spread through the city, the Southern New England Telephone Company's switchboards were flooded with the greatest number of calls since the hurricane of 1938. All afternoon and evening there were some 250 operators on duty as compared with a normal force of 150.THC

Nearly one-third of the victims were identified by dental charts. Marks from operations were also helpful, as two women were identified by their scars from Caesarian operations. Another victim was identified from a bad shoulder injury of several years prior. Jewelry was helpful, particularly in the case of wedding rings which bore initials. Clothing and shoes were recognized in a few cases.

Chart of Deaths by Place and Date, on file at Connecticut State Library, State Archives: 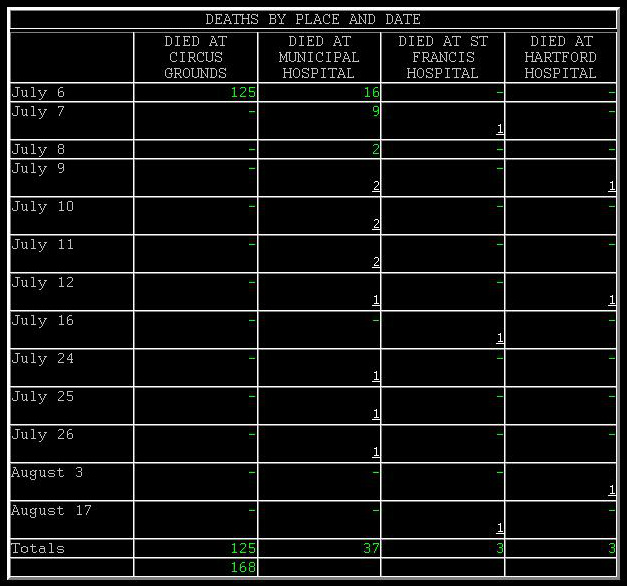 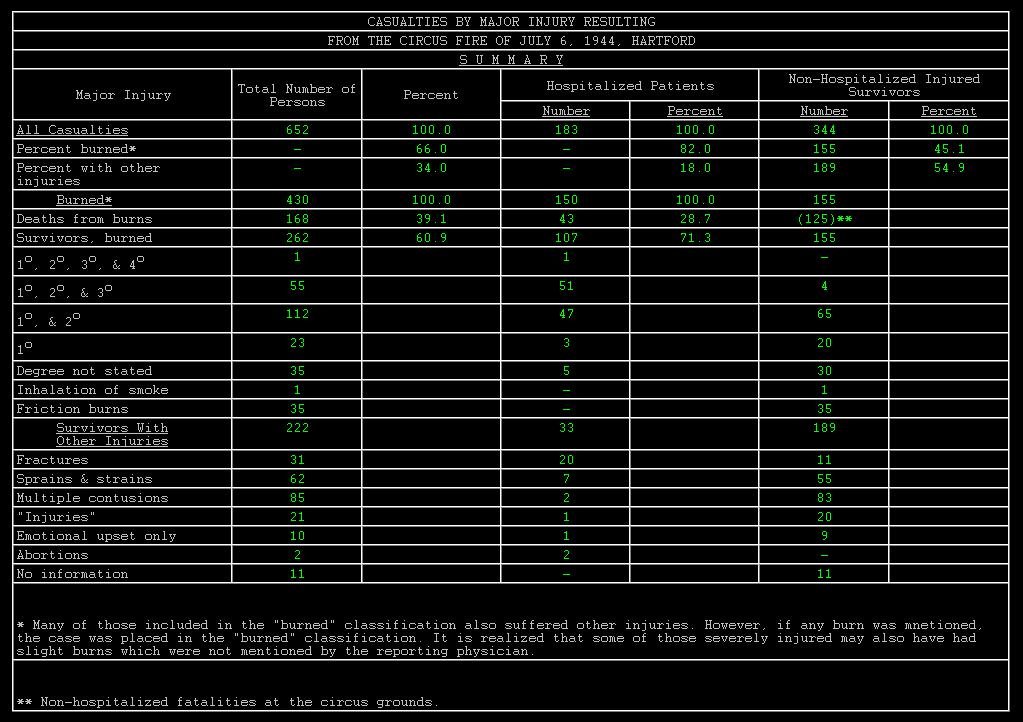 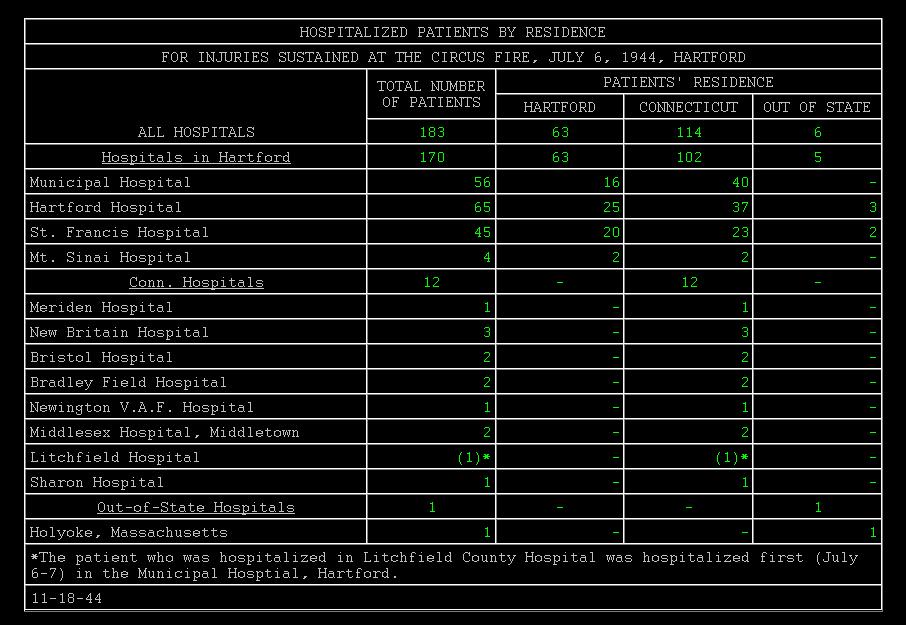 Chart of Deaths, Resident and Non-Resident, By Age, Sex and Race, on file at Connecticut State Library, State Archives: 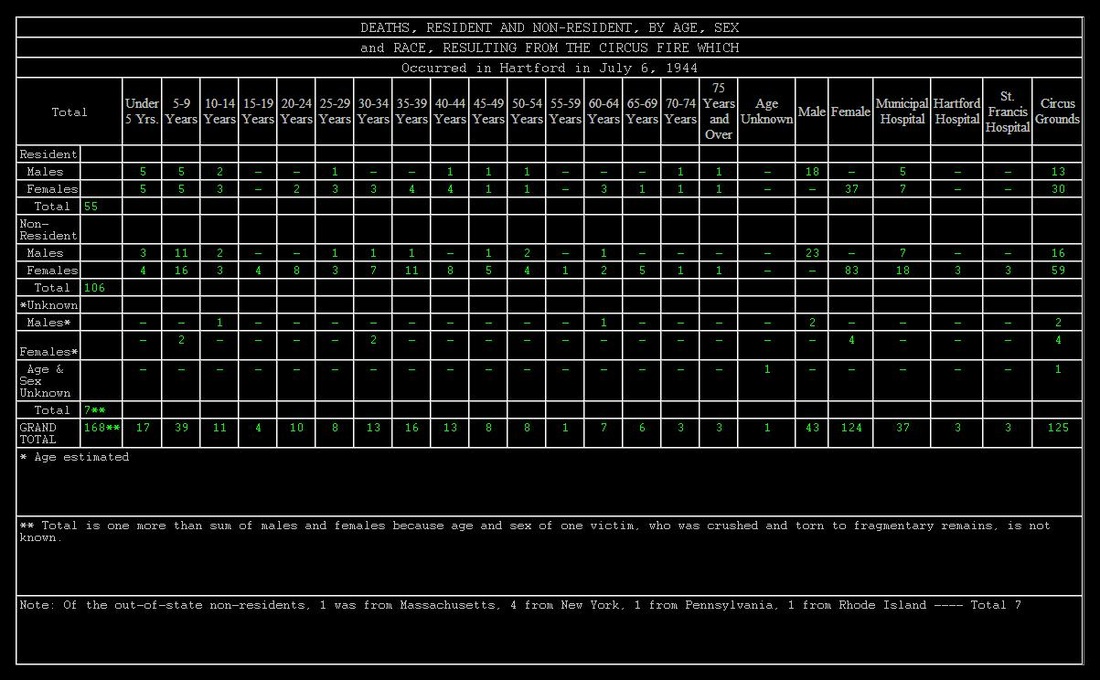 Chart of Circus Fire Casualties, Resident and Non-Resident, by Age and Sex: 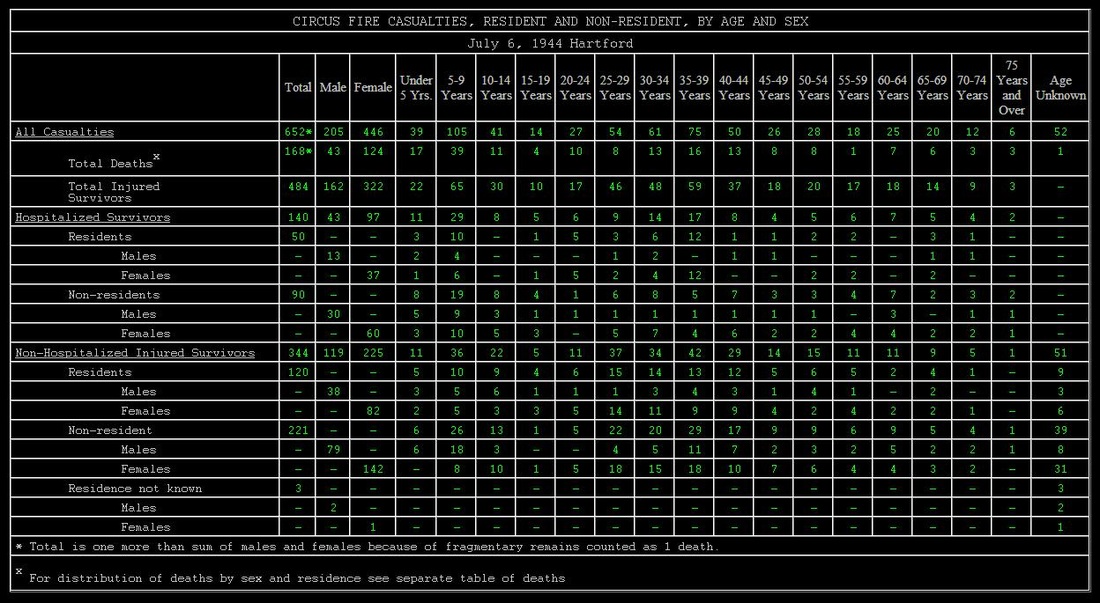