Mrs. Audrey Catherine (Rieger) Hager of Lake Terramuggus, Marlborough, was born July 30, 1921 in New York City, daughter of Brooklyn-natives Anna (Liedecker) and Joseph Rieger.  She attended the circus with her husband James William Hager and their son, James Jr.  When they noticed the fire, Mr. Hager grabbed their child under his arm and jumped to the ground behind the bleachers, thinking Audrey was right behind them.  Mrs. Hager was found dead at the circus grounds after the fire on July 6 and was buried at Holy Rood Cemetery in Westbury, Long Island, NY after services at the Chester A. Fulton & Son Funeral Home in Freeport, NY.  She leaves her parents; her husband James and their 15-month old son; her brothers Joseph Rieger, 16, and Francis Rieger, 10; and her sisters Mrs. Rosemarie Kehoe, 28, and Miss Joan Rieger, 14.  Audrey was predeceased by her first husband, Dickie Combs, a victim of polio.

Body #2170 was tentatively identified as Audrey Hager at the State Armory on July 6 by her husband, James, then positively identified by dental records on July 7.  The Hager family had been spending their second summer living in a camper at Blish's Beach at Lake Terramuggus in Marlborough.  They had previously resided in Long Island, NY with Audrey's parents, and also had been spending winters in East Hartford, near Mr. Hager's workplace, United Aircraft Corp.  The estate of Audrey Hager was awarded $14,000 by the arbitration board. 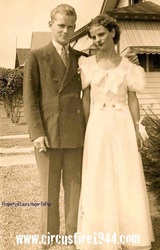 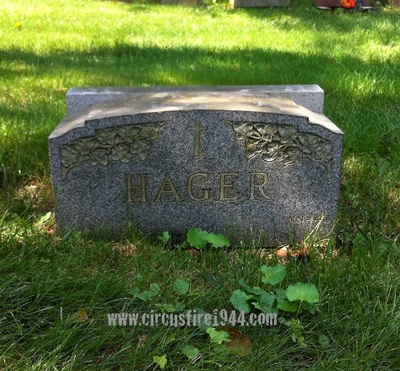