Paul Oliver Viering of 297 Victoria Road, Hartford, was born April 25, 1940 in Hartford, son of Mildred (Jacques) and Hartford native Joseph A. Viering.  Paul was found dead with his mother at the circus grounds after the fire on July 6 and were buried at Mt. St. Benedict Cemetery in Bloomfield after services at the O’Brien Funeral Home in Hartford on July 10.  Paul leaves his father, Joseph, with the Hartford Fire Department; his maternal grandparents, Oliver and Marion (Rodrigue) Jacques of Hartford; and his paternal grandmother, Mrs. Theresa H. Viering of Hartford.

Body #1527 was identified at the State Armory as Paul Viering by his father, Joseph, on July 6.  Paul and his mother attended the circus with his aunt, Theresa (Viering) Franz, 35, and his uncle Richard Franz, Sr., 41, and their son Richard, Jr., 6.  Theresa and Richard Jr. sat with Paul and Mildred in the reserved seating area until an usher made them move to their own seats in the bleacher section.  Moments later, the fire began behind the area where Mildred and Paul were seated.  The Franz’s escaped without serious injury. 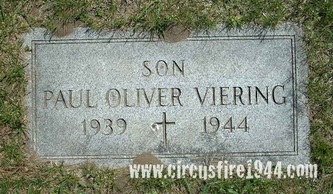