Mrs. Anna Barbara Waichen, age 62, of 19 Golway Street, Manchester, was born in 1882 in Lithuania and immigrated to United States in 1913 with her husband and son.  She was found dead at the circus grounds after the fire on July 6, and was buried at St. Bridget's Cemetery in Manchester.  Mrs. Waichen leaves her son, Joseph J. Waichen, 36, and three daughters: Miss Helen W. 'Nellie' Waichen, 31, of New York City; Mrs. Adele 'Ella' August, 37; and Mrs. Sylvia Songailo, 25.  Mrs. Waichen was predeceased by her husband, Victor, in 1930.

Anna attended the circus with two of her daughters, Nellie and Sylvia, and her grandson Edward Robert “Bobby” Songailo, 4.  They all met at a bus stop in Hartford and went to the circus in Nellie’s car.  Sylvia and her son Bobby sat near the exit; when Sylvia saw the fire, the two of them ran out.  Nellie and her mother Anna sat near the front, and as they were making their way to the exit, Nellie lost her grip on her mother’s hand and lost her in the crowd. Body #4508 was identified at the State Armory as Anna Waichen by her son-in-law on Friday, July 7, and on the body was found a ring and a wedding ring. The estate of Anna Waichen was awarded $6,500 by the arbitration board.

It was reported that in 1930, Anna's husband set the family home on fire, left the house and took his own life by hanging.  Anna, who had been ill and was bedridden at the time, was carried out of the house by her son Joseph.  Daughter Nellie was also in the house and was able to escape without harm. 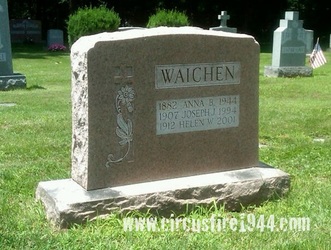 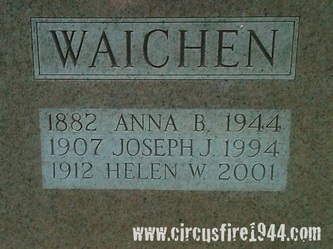 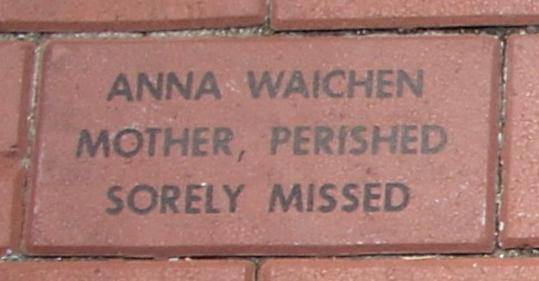